The Jackson-Madison County Sports Hall of Fame exists due to the hard work and dedication of a number of individuals. One of the founders of this organization was Billy Schrivner, and his dedication and leadership provided the basis for what the JMCSHOF has become. After retiring from the board, Schrivner continued to serve as a valued mentor and advisor until his passing in March 2014. It is with great honor that the Sports Hall of Fame Board grant the Billy Schrivner Distinguished Service Award in recognition of his selfless gifts to our athletic community. 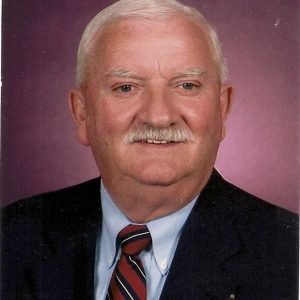 Due to his significant impact on Madison County youth, especially as head football coach at West High School, the late Hix “Sonny” Foote Jr. is the recipient of the 2020/2021 Billy Schrivner Distinguished Service Award.

Foote never played football until his senior year of high school, when Mercer High and four other Madison County schools consolidated and their students went to South Side High in 1957-58. Foote, who played basketball at Mercer, played all sports at South Side and was a starter on the football team.

That was the extent of his football experience when he was offered the job of developing a football program at West High School in Denmark in southwest Madison County. After high school, Foote had served as a drill sergeant in the Army and later worked other jobs before completing his college degree to become a teacher and coach in 1980.

His former high school principal, James Walker, had become school superintendent and offered Foote his choice of two jobs. He could coach girls basketball at South Side, where Foote’s daughter was a starter on the team, or he could try his hand as the football coach at West.

Foote chose West, telling Walker, “I don’t know what kind of football team I can develop, but I would like to try to develop some successful young men.” Foote went home and told his wife Vicky, “I’ve got the chance of a lifetime to make a real difference in kids’ lives.”

West had won one game in its inaugural football season the year before. Foote had to bush hog the practice field, erect a goal post and use hand-me-down uniforms donated by another school. Above all, in a community known for its outstanding basketball teams, he had to motivate, condition and teach young players the basics of football. There was no middle school football program, so the game was new to West’s athletes.

That first season in 1980 the team won two games, including homecoming against Gleason. The second team in 1981 posted the first winning season with a 6-5 record.

The third year in 1982, West’s Tigers put together an impressive 7-3 record and won the Reelfoot Conference Championship. Foote was selected as The Jackson Sun’s Coach of the Year.

Foote coached at West through 1989 and made the state playoffs in 1986 and 1989. The school closed in 1990, and Foote became assistant principal at North Side High. But the bond he had with his West players remained strong for life.

When Foote was hospitalized in September 2017, many of his former players visited, prayed for him, hugged him, and told him to fight hard. Foote was 78 when he died on Feb. 1, 2018. One of his pallbearers was a West player who represented all of the Tigers coached by Foote.

A deacon and Sunday School teacher for 40 years, Foote is survived by Vicky, his wife of 55 years, and daughters Paige and Kippi.

It is with great honor that the Jackson-Madison County Sports Hall of Fame presents the 2019 Billy Schrivner Distinguished Service Award to Terry Moore. Moore’s legacy of dedication, humble service, and mentorship carries through decades of building successful youth and community sports programs in West Tennessee.

Moore is most well-known for his role as Umpire-in-Chief at the West Tennessee Healthcare Sportsplex since its opening in 2006. He hired, mentored, and supervised all the umpires and scorekeepers for the Sportsplex, as well as for numerous baseball, basketball, softball, and volleyball leagues in the area. If there was a sporting event in West Tennessee, odds are Moore had a hand in training, supervising or assigning one or more of the officials involved.

In season, Moore basically lived at the ball park, oftentimes clocking 30-hour weekends. Managing 120 umpires and the opinions of fans oftentimes proved tricky. He’d listen to complaints and compliments from fans, and always gave constructive feedback to every umpire involved.

Moore’s influence went far beyond supervising umpires at the Sportsplex. Many would agree that the Sportsplex couldn’t run without Moore’s continuous dedication to go above and beyond his job responsibilities. He made a point to befriend everyone who worked there, and often helped the grounds crew. During tournaments, you could find Moore by the flagpole area, offering kind words and a smile to staff, players, coaches, parents, and fans.

Moore’s passion for sports began at an early age, playing basketball, football and baseball. Moore went on to play baseball and football at Tigrett Middle School and baseball at Jackson Central-Merry High School. When he was 15, Moore started umpiring baseball in his spare time when he wasn’t playing. He later spread his talents to officiating basketball and volleyball, later becoming a TSSAA official for middle and high school volleyball. Volleyball was a natural fit for Moore because he was an avid player in various city and church leagues.

When Moore started a family, he put his umpiring career on hold to start coaching his son’s teams. Always willing to lend a hand to others, Moore would often pick up other kids to ensure they made it to practice and games. When his son and step-son got to high school, Moore volunteered to help on the field at practice, coordinate fundraising initiatives, and assist with gameday travel arrangements and pre-game meals.

When he wasn’t at the ball park or spending time with family, Moore enjoyed following his beloved St. Louis Cardinals and hunting.

On April 17, 2018, Moore suddenly passed away after yet another night spent supervising a Little League tournament at the Sportsplex. His son and step-son, Garrett and Brandon, and wife, Tana, have stepped in to carry on the legacy of their beloved father and husband. The flagpole at the Sportsplex will remain a symbol of fond memories and the profound impact Moore had on thousands of people.